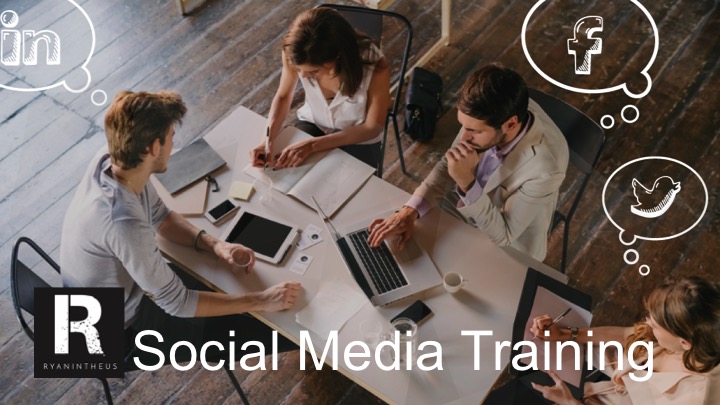 Capitalizing on his eleven years of Social Media expertise, Ryanintheus LLC CEO Ryan Hodgson created a Social Media Training for time-poor business executives and content creators who want to become an influencer.  The training shows how to become “thought leaders” and “influencers” starting where you are at in terms of your social competence. The program covers social media best practices, engagement strategies, content development, and growth strategies. Ryan has partnered directly with brands and with Marketing and PR agencies to coach executives from leading companies such as Microsoft, Verizon Wireless and SAP’s Fieldglass. Ryan has also developed a one hour Social Employee Online Training for your entire workforce.

In April 2017 Ryan was named the 20th most retweeted marketer in the world.  He has been the agency lead for HTC’s 20M person social media audience and amassed a social footprint himself of over 200,000 followers across Twitter, Instagram, Facebook and LinkedIn.  His Twitter page is currently ranked in the top 100 for both brands and individuals from Seattle. He has co-authored posts in the Huffington Post, who also named him one of the nonprofit world’s Twitter Powerhouses.

“Ryan is a social media guru who is able to easily and quickly get pros better and novices up to speed. After taking his advice, I was able to accelerate my social presence and proficiency as was the rest of the team. Expert in the field –hands down.”

Notable brands have also sought to partner with Ryan as an influencer. In March 2017 he traveled to and toured London to promote the launch of Virgin Atlantic’s new direct Seattle to London route. In February Ryan interviewed Hugh Jackman in NYC for the release of “Logan” a 21st Century Fox film.  He has also worked with Uber and Lib Tech and was recently featured on the inspiration podcast True North Stories.

For information about  social media training or the online employee training please fill out the form below.