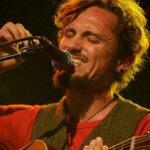 My story about John Butler goes back more than most.

I have no idea how many years ago it was when I was with friends in my home town of Perth, Western Australia, it was the morning after a rather a large night of fun at a house party, we were less than healthy and rolled down to the local Fremantle markets to find something we were calling breakfast at about two in the afternoon.  As we entered I noticed a guy sitting on the ground out the front of the markets busking, guitar case open… that guy was John Butler.

Years later he is Australia’s most popular musician, or if he isn’t he isn’t far off!  He is most definitely my favorite musician, and his music is enjoyed the world over.  In 2008 I took the shot of him above at Blues Fest in front of about 15,000 people.  Last year, I was lucky enough to get tickets and a backstage pass to see the John Butler Trio at The Moore Theater.  It was a surreal moment to share a beer with someone you respect so much. I become impossibly humble.

Recently John played Red Rocks and released a killer Double CD + DVD set of the concert including an amazing version of my favorite track by any artist, “Ocean”.  It is a truly beautiful piece of music that showcases John’s extraordinary guitar skills. I hope you like it, stick with it, it’s a long track but the end is incredible!

A Picture Worth a Thousand Memories

"To some extent, Seattle remains a frontier metrop

I love this quote. It very simply reframes our per

One of my favorite benefits of spending time in na

What's the first thing you thought of, or you felt

"This morning I saw a coyote walking through the s

"The most powerful emotions that we experience hav

It's amazing how an experience can change so much

What we think is our reality. One of my favorite i

For a long time, I've been aware of the toxicity o