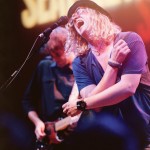 There is a lot being said about this guy recently so I thought what the hell, here is my take on Allen Stone.

Firstly lets talk about the man, or at least the man in my head, created by maybe ten to fifteen interactions with him.  The word that comes to mind is gentleman. He is a quiet, caring man who has an immense warmth in his smile and in his eyes.  When you talk to him he listens and engages thoughtfully.  Like a said a gentleman…

Now lets talk about the performer.  The performer has swagger, attitude, has a wicked tongue, can raise the roof with his voice yet can swoon with the angels.  Put a crowd in front of Allen Stone and he transforms into a ridiculously talented Soul/R&B singer who sounds like Stevie Wonder with scraggly blonde hair and red rim glasses.  Having had the privilege of twice seeing Allen sing at the Seattle Living Room Shows, quite literally on one of those occasions sitting at his feet, I can tell you that even in those stripped down moments where a singers talent is truly exposed, Allen Stone is the real deal.  In fact in this setting he is one of the best performer I have ever seen!

Change the setting and move to a sold out show at Seattle’s famous Crocodile, full band alongside him, and what you see is a crowd literally high with excitement… Allen knows how to raise people up, how to draw them in and then deliver the goods at the most perfect moment.  Yes I am on the Allen Stone soul-train and I want you to join me.

As a footnote to this post I’d like to mention that Allen’s new Album titled “Allen Stone” dropped yesterday and as I write it is sitting at fifty-nine on iTunes US Charts.  You can get it by clicking here.  Incidentally our very own The Head and the Heart’s self-titled album is sitting at ninety-seven giving Seattle two albums in the top one hundred!

London Is Calling And So Did Virgin Atlantic!

« Previous post
Tonight: WineUp – A meet-up for Team Up!