Band of the Week: Lemolo 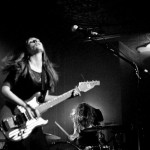 In the first of my new series of blog posts titled “Band of the Week” I am featuring the sensational Lemolo.  This Indie-Pop duo hails from Seattle and includes Meagan Grandall (Vocals, Piano, Guitar) and Kendra Cox (Drums, Piano), and while I’ve only seen them live on just two occasions I am totally sold.

I had been hearing word of this band for a while, the people who I trust most had said the right things about them, but you never really know until you have seen a band live as to whether they have the ability to grab you and keep you in that moment through their whole set.   So when I wandered up early to the Yoga Studio at Doe Bay Fest to get in line I was excited about what I was about to experience.  A good indication that I was on the right track by getting there early was that when I arrived, one of the six or seven already in line was The Head And The Hearts’ Josiah, who it turned out was a huge fan and friend of Lemolo.  The numbers swelled quickly and by the time the doors opened there were clearly more people than the venue could hold, so people poured in, filling the venue to capacity in seconds.

The capacity crowd inside the venue was buzzing and both they, and the crowds who had gathered at the windows outside the studio were not let down.  I was mesmerized by the performance; Lemolo is a stunning blend of Meagan’s sensual voice, Kendra’s thunder like drums, moody keys, and hypnotic guitar, and it’s a recipe you can’t get enough of.  In addition these two girls seem to have a wonderful connection and visibly enjoy both playing together and what their music does to a crowd.  This is definitely a band to invest your time in, they won’t let you down!

Below are a few clips, the first produced by the wonderful people at Sound on the Sound which captures Lemolo in their own studio, the second was taken by an audience member standing just in front of me in that very same Yoga Studio mentioned above (please understand the music quality in this one is not great, but it does capture some of the energy of that special night).  The third is to prove that Lemolo does in fact have color and they are not actually black & white as the rest of this blog post may lead you to believe…

Band of the week, Doe Bay, Lemolo, music, Seattle, Sound on the Sound, The Head and the Heart
September 26, 2011by Ryan Hodgson

London Is Calling And So Did Virgin Atlantic!